You are about to leave NAATSIHWP. Click OK if you want to proceed. 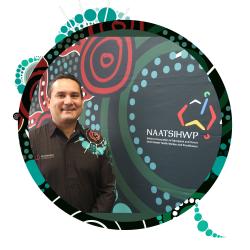 Karl Briscoe is a proud Kuku Yalanji man from Mossman – Daintree area of Far North Queensland and has worked for over 18 years in the health sector at various levels of government and non-government including local, state and national levels which has enabled him to form a vast strategic network across Australia. Read More...

Karl has taken up the position as the Chief Executive Officer of NAATSIHWP to progress and represent the invested interests of Aboriginal and/or Torres Strait Islander Health Workers and Health Practitioners.

Previous to NAATSIHWP Karl was the Clinical Services Manager at the Galambila Aboriginal Health Service in Coffs Harbour. He has a vast array of experience at Senior Executive levels including previous positions as the Executive Director of Indigenous Health and Outreach Services in Cape York and Torres Strait Hospital and Health Service, which provided the skills and knowledge to coordinate strategic intent to address the health needs of Aboriginal and Torres Strait Islander people.

Karl commenced his career in health when he completed an Aboriginal and/or Torres Strait Islander Health Worker traineeship with Queensland Health in Mossman Community Health where he progressed to the Senior Health Worker role, Principal Policy along with Partnership Management positions.  He completed the Primary Health Care training up to the Advanced Diploma and then went on to complete a Masters of Public Health, Graduate Certificate in Public Sector Management, Diploma in Practice Management and more recently completed the MURRA Indigenous Business Master Class Program.

Karl’s vision for his people is to see dramatic improvement in the premature mortality rates of our Aboriginal and Torres Strait Islander peoples, not only in communities but the entire nation, ensuring the life expectancy rates of our people are equivalent or better than that of non-Indigenous Australians. 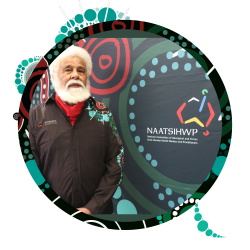 Born in Queensland before moving to Sydney with family. The authorities of the day intervened in my life with me ending up being a Ward-of-the-State. While no doubt I lost a lot, things could have been worse. Read More...

I had a good Catholic School education in Hunters Hill and Balmain. Growing up, my adopted mother always said, “When you leave school you are to become a tradesman.” True to her word she organized it not far from home. A fitter and turner no less. Dare I say it, in the footsteps of one Charles Perkins. Far too big a man for me to follow all the way. A bit later I went back to College to study engineering. This led to me coming to Canberra to work at the Tidbinbilla Tracking Station. A great job with a few perks – free travel to work and a subsidized canteen. After a few years, a number of us were consolidated in premises in Fyshwick, the industrial area of Canberra. There, I came across my first public servant. The big boss Charlie. While he did not employ me, he had oversight of the organization that did. I said to Charlie one day, “I would like more money”. “What’s your degree?”, he asked. “None” was my response. “Come back when you have one”.

It was at the then College of Advanced Education, now University of Canberra, that my lecturer in public policy asked why I was not with the relatively new Aboriginal Development Commission. After spending some time with Kumaji Bourke, the Manager, as his HR offside, I was offered a job. The start of many a year in Indigenous affairs. The Commission, Aboriginal Hostels Limited, on secondment to Australian Government Department of Finance and the Department of Foreign Affairs and Trade. I then moved over to the Australian Department of Education, Employment and training, as it was then called. There has been as many changes as ministers. Well that’s how it seemed.

I have worked in many Indigenous education areas and on many programs, almost from the beginning of IESIP, the Indigenous Education Strategic Initiatives Program. The one to bring about educational equality by 2000. In more recent times, I am part of an Indigenous working party providing advice and input to the ACT government on mental health and related matters. This is a part time, voluntary endeavor.

Since January 2021, I have been with NAATSIHWP. It is an eye opener and I am amazed at the amount of work it achieved during the last reporting period of six months that ended December 2020. 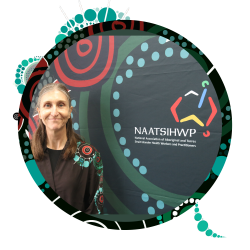 Through spending much of her career working with and for Aboriginal and Torres Strait Islander people, she has been fortunate to have had the opportunity to contribute to a range of national and local initiatives, and developed expertise across policy development, program management and service delivery.

Jodie joined NAATSIHWP in February 2020 and is looking forward to supporting the team to strengthen the capacity of the Aboriginal and Torres Strait Islander Health Worker and Health Practitioner workforce; address Indigenous health inequity and disadvantage and demonstrate the benefits of community control and self-determination. 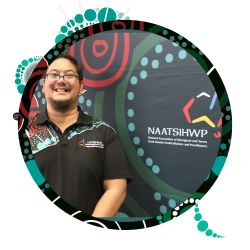 James grew up in Roleystone (Noongar Boodja (land) of the Whadjuk people) Western Australia and has spent the majority of his working career within the Aboriginal Health Sector. Read More...

Graduating as a Registered Nurse in 2004, James worked as a Community Nurse in a variety of sectors before working as a Clinic Nurse at ATSICHS Brisbane. He returned to Perth and took up a role at Derbarl Yerrigan Health Service as a Clinic Nurse before starting his career at the Aboriginal Health Council of Western Australia as a clinical trainer. James has delivered a number of training programs over his years at AHCWA before progressing to becoming the Workforce Development Manager, overseeing the implementation and facilitation of the day to day running of the Registered Training Organisation and Health Programs whilst also providing support to AHCWA’s 22 member services. He also sat on a number of national advisory committees; reviewing training packages, resources and supporting changes to State legislations to recognise the role of the Aboriginal Health Worker and Practitioner.

James joined NAATSIHWP in February 2021 and is eager to utilise his knowledge and networks to contribute to the success of NAATSIHWP and its members. 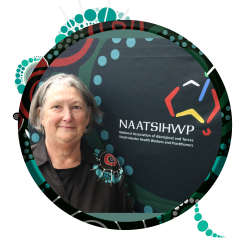 I began life in Longreach, Queensland, was born in Kogarah NSW and grew up in the west of Sydney in the then market garden area of Blacktown. My 6 other brothers and sisters had the run of the farm and the overseas telecommunications property next door. Read More...

I left home to join the then Women Royal Australian Navy Service, they sent me to Canberra in 1972 and I have stayed here ever since. As a mature age student, I began my further education. I have a Bachelor of Economics from ANU and a Graduate Diploma in Administration and a Graduate Certificate in English as a Second Language from the University of Canberra.

I have been working since 1969 and have retired 4 times but interesting opportunities to work with different people in different organisations always draws me back. One of the calls back from retirement, was an opportunity to work in Indigenous Affairs as part of the then Department of Families, Communities Services and Indigenous Affairs from 2007. I had a great opportunity of working with many people, from many areas in Australia, in managing budgets for small and large projects.

I have worked as a volunteer in a number of community organisations for over 40 years. I am currently in Rotary. In addition I undertake auditing for small not for profit organisations and I am an ACT Justice of the Peace.

Working for NAATSIHWP is a great pleasure. The policy/program work being undertaken by NAATSIHWP on behalf of its members is very interesting and makes each day I am in the office very enjoyable. 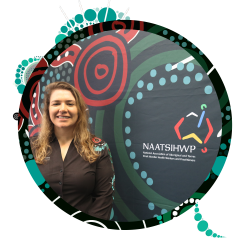 Kirrilaa is a proud Ngiyampaa Barkindji Woman from far West NSW. A recent university graduate in Public Health, Kirrilaa is committed to system reform in the health care sector to better resource and support our communities in improving health and wellbeing outcomes. Particularly through supporting the emerging work force as they engage in training. Read More...

Kirrilaa has spent the last five years actively engaging in the not-for-profit health sector with leadership opportunities and professional development. Through this she has gained a broad range of knowledge and experiences in organisation governance, both community controlled health services and the mainstream health system, as well as government health policy and its impacts in our communities. 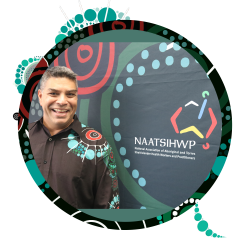 Having joined NAATSIHWP in October 2018 and new to the Health sector, Shayne has always worked in the Customer Care field.  Predominantly working in Hospitality, Travel and Tourism he recently studied Auslan to become a Sign Language Interpreter, later working in the Disability field prior to moving to Canberra in 2018. Read More...

His passion for looking after people and natural ability to connect with people from all walks of life is what drives him and keeps him young.  He is looking forward to honing his exceptional customer service skills and dedicated work ethic on looking after you our members.  Because you matter, he wants to provide the best service for you!  So hopes to hear from more of you over time with any suggestions for improving services or the health services culture in general.  Tell him what you would like Training and Development in so he can make the right suggestions for you and hopefully make your jobs easier.

Out of work he loves to cook Sri Lankan food, entertain friends over a good feed and games night, travel, scuba dive, he has a green thumb in the garden and likes to expand his consciousness and understanding to the various energy forms/beings of Love and Light and strengthening his connection to Mother Earth and beyond.

Shayne has very mixed heritage, born in England with Sri Lankan parents and Scottish and English ancestry on his father’s side while Portuguese, German and Dutch on his mother’s side. He has lived, laughed and loved while working in VIC, QLD, NT, WA, Northern NSW and now the ACT he now hopes to pass on his very own wisdom of experience. 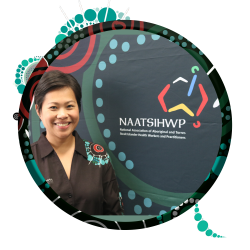 She joined the team in April 2020 during the height of the COVID-19 outbreak, a memorable start to mark her entry into the world of not-for-profit sector. While she enjoyed the challenges and successes of working in the hospitality industry, she has always felt the need to serve a cause bigger than herself. And what better way to achieve a sense of purpose and find fulfilment in one's daily work than providing administrative assistance to an organisation that works hard to close the gap in health outcomes between Indigenous and non-Indigenous Australians.

Whilst all of this is entirely new to her, she is eager to make the role her own and make significant contributions to the organisation’s goals. She brings with her a myriad of skills and expertise harnessed over the years, and is always eager to learn more. 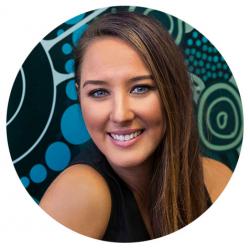 Renae has been a part of the NAATSIHWP Team since April 2016. Renae’s passion is for people and enjoys building relationships and communicating with members and stakeholders. Being the Media Officer means she is able to travel to regional forums and conferences to communicate face to face, as well as interact via social media with members and affiliated organisations. Read More...

Renae uses her skills as a professional freelance photographer to capture Aboriginal and/or Torres Strait Islander Health Workers and Health Practitioners in a series of powerful images which have been used for social media and also a nationally recognised exhibition called “Unsung Heroes” which was featured on NITV News and The Point.

Renae came to NAATSIHWP from Diabetes ACT where she began her journey in the not-for-profit health sector as the Fundraising Coordinator, which then led to a position as Health Administrator. She is now able to combine all of those skills in her role at NAATSIHWP and is thoroughly enjoying working with such an incredible team.